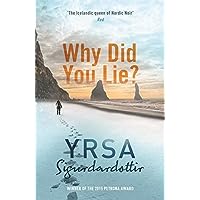 BLURB: The Sunday Times top crime read of the year.

A journalist on the track of an old case attempts suicide. An ordinary couple return from a house swap in the States to find their home in disarray and their guests seemingly missing.Four strangers struggle to find shelter on a windswept spike of rock in the middle of a raging sea.

They have one thing in common: they all lied. And someone is determined to punish them…

Why Did You Lie? is a terrifying tale of long-delayed retribution from Iceland’s Queen of Suspense.

The title of this latest standalone novel by the “Queen of Icelandic Noir” is the question anonymously in letters of three seemingly disparate people, or groups of people. Firstly, there’s Nói, Vala and their 15-year-old son Tumi, who return from a house swap in the US to find their house in disarray, their American guests missing, but having left behind some of their belongings, as well as notes bearing messages asking why they lied, or variations of the same question. Then there’s the four people (Heida, a female engineer who’s to fit radio equipment in the rock’s lighthouse; two male workmen, Ívar and Tóti, there to do basic repairs; and Helgi, a male photographer who’s taken the rare opportunity to tag along and take pictures) stranded out on the rock, as the helicopter due to return to collect them 24 hours later develops problems, and the claustrophic nature of the situation, as well as suspicions of each other set in – particularly when their number is reduced by one, with one of the mysterious notes discovered in Tóti’s bloodstained sleeping bag. Finally, there’s a policewoman, Nína, whose seemingly hitherto content journalist husband, Thröstur, attempted suicide and is now on a life-support machine, with Nína sitting night after night as she has to make a decision about when it’s switched off.

The novel moves between each group of people, drip-feeding us clues and ramping up the tension almost unbearably, then moving on to the next group, as we try to work out the connection between them, what the lie was, and why it’s so important to someone – and who that person is. It’s possible to figure out who that person could be when we discover, thanks to Nína (who uses her position as a pariah in the police station to dig for clues in the basement she’s meant to be clearing out) when the lies were perpetrated. But who they are now is an entirely different story – as are the lengths they could go to to punish those they see as the transgressors. Are the tormenting notes enough to unsettle the victims – or could they go so far as to kill?

Sigurdardóttir has an admirable understanding of human psychology, and although they geographically fall into the ScandiNoir category, the events described in her books could happen anywhere in the world, so even if you don’t consider yourself a huge fan of books set in cold dark Northern places, don’t let that put you off. The interaction between her (always realistic) characters is what makes her novels so readable and authentic; the settings are secondary.

This is only the second Yrsa Sigurdardóttir book I’ve read since I was lucky enough to meet her at Bloody Scotland – the first was Someone To Watch Over Me, which is one of the series of six Thora Gudmundsdottir books (so far) about a lawyer and which I’ll review soon. And I’m delighted to have another two here to read. I’m now a firm fan and she will definitely be in the autobuy category for me from now on. She’s excellent at sending shivers up your spine in the most innocuous situations, and leaves most of the crowded market of so-called “psychological thrillers” standing. Little wonder she won the prestigious Petrona Award in 2015 for The Silence Of The Sea – and don’t bet against her winning again sometime soon!

Purchase a copy  from Amazon UK, or support your local bookshop or library.

I’d like to thank the publishers Hodder & Stoughton for my copy of this novel in exchange for an honest review.

10 thoughts on “Why Did You Lie? – Yrsa Sigurdardóttir”