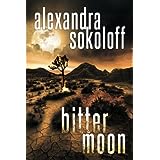 BLURB: FBI agent Matthew Roarke has been on leave, and in seclusion, since the capture of mass killer Cara Lindstrom—the victim turned avenger who preys on predators. Torn between devotion to the law and a powerful attraction to Cara and her lethal brand of justice, Roarke has retreated from both to search his soul. But Cara’s escape from custody and a police detective’s cryptic challenge soon draw him out of exile—into the California desert and deep into Cara’s past—to probe an unsolved murder that could be the key to her long and deadly career.

Following young Cara’s trail, Roarke uncovers a horrifying attack on a schoolgirl, the shocking suicide of another, and a human monster stalking Cara’s old high school. Separated by sixteen years, crossing paths in the present and past, Roarke and fourteen-year-old Cara must race to find and stop the sadistic sexual predator before more young women are brutalized.

Bitter Moon is the first of the Huntress novels I’ve read, shamefully – but I can assure you it won’t be the last. In fact, I’m lucky enough to have the previous three novels to read.

This book has two main characters, and two timelines. The first is Cara, a 14-year-old girl who, 16 years previously, has just been released from youth detention – which consisted of being locked up 23 hours a day – to a group home (basically a small children’s home.) Then there’s Roarke, in the present day, who’s taken a leave of absence from his job as an FBI profiler and agent to look into Cara’s past – she’s the one case he can’t let go off. We’re given the impression that she may now be something of a notorious figure – a vigilante, who kills sexual predators who prey on girls, and possibly all women. Other times and incidents in Cara’s life are doubtless dealt with in the first three books, but in this book we’re learning about the 14-year-old Cara, and incidents that may have set her on the path to becoming the woman she is now.

The reason Cara’s in a group home, as opposed to being released to her family, is because they were all murdered when she was only five by a serial killer called the Reaper, who also left her for dead. She survived, but always wears turtlenecks to hide her scars. Cara has a special power – she can see predatory men. Basically, the evil is like an aura to her, and she labels such evil simply, “It.”

This book only really deals with the two weeks immediately after Cara’s release from incarceration, and Roarke’s investigation of what happened during it, 16 years on. During the two weeks Cara was in Los Alamos several things happened – a girl called Laura Huell committed suicide by slashing her wrists. Cara was sure she was a victim of sexual abuse, as whenever she saw her in school, she was surrounded by blood. Also, another girl, Ivy, who’d been abducted by a man in a van, raped and set on fire, but had miraculously survived her injuries at the time, finally died. And 45 miles away, on a dangerous desert road, Pierson, a group home counsellor, had his throat slashed. However, Cara’s involvement in this is dismissed, as she didn’t have access to a car, had been locked up since she was 12, so presumably couldn’t drive, and was alibied by her 9-year-old cousin – she’d been spending a couple of nights at her aunt’s, and her cousin had slept beside her.

Roarke’s desperate to know what caused so many calamitous events to happen in the small space of time Cara was in town – it’s not just coincidence that whenever Cara is around there’s a whirlwind of violence. Visiting some of the places and people that are still around from that time, he falls in with a doctor who’s also a nun, and who was caring for Ivy before she died. Her sharp mind gives him someone to bounce ideas off – something he usually gets with his FBI team. She tells him about meeting Cara when she visited Ivy. He also meets some men who’d known Cara, and a couple of them give him a bad feeling. Did Cara see “It” in them? Who attacked Ivy? And what was troubling Laura so much she felt compelled to commit suicide?

The book uses the trick of short chapters, often ending on a cliffhanger, to keep you turning the pages, and moves between the two characters, who I found equally compelling. Alexandra Sokoloff clearly has strong feelings – about the treatment of young offenders in custody, the danger of predatory males working in group homes, and violence – particularly sexual violence – against women in general, young women in particular. She’s also an incredibly talented author. Cara gives us someone to cheer for, as she annihilates predators who would continue to seek out vulnerable young women. In fact, it would make a great action film, although I can imagine a lot of men wouldn’t really go for it – but, hey, it would make a change from watching violence against women. Me? I say, “Go Cara!”