Now, I originally reviewed this book last October. But it’s now out in paperback, and last I looked it was £1.99 on Kindle, which is a bargain price for one of my favourite books of the year (I’ve had my Top Ten from last year made up for ages, but it was handwritten in one of my many notepads, which got mislaid when we were painting and has just reared it’s head now. Feels a bit dumb putting it up now but I think I will put it up this week just to have it on record!) Anyway, this book made it onto the list with ease, and I’d recommend it to any crime fiction fans! 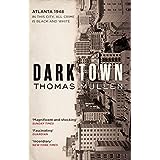 BLURB: Atlanta, 1948. In this city, all crime is black and white.
On one side of the tracks are the rich, white neighbourhoods; on the other, Darktown, the African-American area guarded by the city’s first black police force of only eight men. These cops are kept near-powerless by the authorities: they can’t arrest white suspects; they can’t drive a squad car; they must operate out of a dingy basement.

When a poor black woman is killed in Darktown having been last seen in a car with a rich white man, no one seems to care except for Boggs and Smith, two black cops from vastly different backgrounds. Pressured from all sides, they will risk their jobs, the trust of their community and even their own lives to investigate her death.

Their efforts bring them up against a brutal old-school cop, Dunlow, who has long run Darktown as his own turf – but Dunlow’s idealistic young partner, Rakestraw, is a young progressive who may be willing to make allies across colour lines . . .

Soon to be a major TV series from Jamie Foxx and Sony Pictures Television.

Now, finally, somewhat later than anticipated due to laptop issues, to Darktown. This is one of those novels you’ll find you really want to savour, rather than rush through and not enjoy to it’s full extent – because there’s a great deal to enjoy. It also made me look at Mullen‘s earlier novels and buy one, as it was a reasonable £2.49 on Kindle.

Set in 1948, it’s about the first black police officers – all eight of them – taken on by Atlanta Police Department. The idea is they police the areas where the black community live, colloquially (and somewhat derogatorily) known as Darktown. They don’t have the power to arrest white people, nor do they have squad cars, having to wait (and wait…) on white officers in a van to transport arrestees.

Many of the white police aren’t as pleased with this lift off their workload as you’d think they would be – they see it as a besmirching of the prestigious Atlanta P.D. uniforms, and many white Atlantans are alarmed at the thought of armed black men on the street, police officers notwithstanding. More pragmatically, it keeps them out of areas where they take bribes (and probably, er, favours) from establishments such as Mama Dove’s. Also lucrative business is turning a blind eye – and perhaps more – to the bootlegging which goes on in abandoned factories in Darktown. Plus they have a host of snitches in the area. One officer in particular – Officer Dunlow – sees Darktown as his territory: he decides what goes on there, and who gets a free pass – assuming they pay him off appropriately, of course. His partner is a rookie, the more enlightened Officer Denny Rakestraw, whose just about had his fill with Dunlow beating up blacks for sport, as well as spouting utter rubbish about why blacks are inferior. (Example: ‘Their skulls are thicker, which is why they’re so hard-headed, and also explains their smaller brains.’ It would make you laugh if the guy didn’t actually believe it.)

The issue is, of course, that the black police officers genuinely want to see the community cleaned up, as they and their families and friends have to live there. This puts them on a collision course with Dunlow, beginning when he allows a white driver to go free. Officer Lucius Boggs and Officer Tommy Smith, our main characters, wanted him to be made to show his licence and registration, as he’d damaged a lamppost. Also, at that point there was a young black woman also in the car, wearing a distinctive yellow sundress, and bruised at the mouth. The two black officers see the car again, and see the driver strike her in the face, at which point she runs from the car. She was later found murdered, and dumped in a pile of garbage. The white officers have little or no interest in identifying her, never mind solving her murder, so Boggs and Smith decide, against the rules, to sniff around – only to find someone surprising is also looking into her murder. There are also bits and pieces of useful information, coming from unexpected quarters.

Mullen uses the language of the time, which is obviously essential for authenticity, but still shocking, especially when you think it was only 70 years ago. Men who served their country with pride may have expected a little more respect upon their return home, but nothing had changed. A young Reverend King makes an appearance alongside Boggs’s father, who is also a minister. When Boggs sees Smith’s home, he realises he has led a privileged and rather sheltered background due to his father’s status, receiving little verbal abuse – until now.

Mullen‘s writing is plain, yet beautiful, and you can build up an explicit mental picture of every character with ease. Many of them have fascinating, brutal, devastating back stories, which are woven into the tale with ease, and help you understand why each man is the way he is. An alarming trip to the country demonstrates that Darktown might not be the worst place for a black man to live and work. There is a great deal of talk of families heading north, to Chicago, where they hear they’re not treated with such derision.

It’s little wonder that this is being developed into a Sony TV series starring Jamie Foxx. I’m sure they’ll find plenty more stories to tell about this period, when there were still people alive who had worked as slaves. As well as the historical detail, there’s also a damn fine murder mystery woven into these pages, and, combined, they make Darktown an epic novel, not just for crime fans, and one of the best books I’ve read this year – and we’ve had a bumper crop. Thomas Mullen is most definitely a name to watch, if he’s not already on your radar.

Verdict: Not to be missed.

With thanks to Little Brown and NetGalley for my ARC in exchange for an honest review.