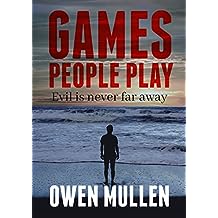 BLURB: Thirteen-month-old Lily Hamilton is abducted from Ayr beach in Scotland while her parents are just yards away.

Three days later the distraught father turns up at private investigator Charlie Cameron’s office. Mark Hamilton believes he knows who has stolen his daughter. And why.

Against his better judgment Charlie gets involved in the case and when more bodies are discovered the awful truth dawns: there is a serial killer whose work has gone undetected for decades.

Is baby Lily the latest victim of a madman?

For Charlie it’s too late, he can’t let go.

His demons won’t let him.

I love it when a great new Scottish writer appears on the scene! Charlie Cameron, is quite unusually, a private investigator, but he has one speciality – he finds missing people. No sleazy divorce cases or dull white collar investigations – although one day he might have to branch out, as poor Charlie doesn’t seem to get paid very often! However, that doesn’t really matter a huge amount, as he’s “a man of means,” thanks to his grandmother’s will.

The big case in this book – although by no means the only one – is Lily Hamilton, a baby whose snatched from her pram while her father has to rush into the sea and rescue her mother, who’s got into difficulties – so all eyes are on them, and someone takes their chance to lift Lily and…disappear.

Not wanting to confide in police, so his already hospitalised wife doesn’t find out, Mark Hamilton goes to see Charlie and asks him to track down his ex-lover, Donna Morton, who he believes has nursed a grievance since he told her he wasn’t leaving his wife for her, and is responsible for stealing baby Lily as revenge. But a search for Donna is futile – her flat’s empty, and her only connection, her sister, hasn’t spoken to her for over a year. It seems like a dead end, but Hamilton’s insistent she’ll have the child.

Another case, brought to him by the girl’s parents, involves a missing college student, Alison Downey, who’s gone missing. At the same time one of her lecturers, Frank Lennon, has disappeared – both last seen at a class night out, which Frank had attended. The smart mouths reckon they were having an affair and have run off together, but speaking to more reasonable people who were colleagues of Frank Lennon and friends of Alison Downey, he begins to doubt this version of events. But if they didn’t go somewhere together, where the hell are they?

They’re great cases, which become increasingly complex, and what’s equally as enjoyable is meeting the group of people Charlie surrounds himself with. There’s Pat Logue, who’s a functioning alcoholic, with his eye on the main chance, and who’s got the patter to get the info where Charlie’s posher voice fails. He’s a bit of a “ballroom dancer” (chancer), and has a habit of talking in football analogies (“If you don’t want to know the score, look away now”; “Anythin’ on, Charlie? The fans are askin'”; “If selected, Charlie. Don’t fancy it, but if selected,” etc.) He’s got a long-suffering wife, Gail, and two sons, and his marriage seems forever on the verge of collapse. He’s a bit of light entertainment in a book with some dark themes. Then there’s DS Gordon Geddes, who’s equally Charlie’s mate, but Pat’s nemesis, mainly as he’s never nailed anything on him. He’s bitter about his ex-wife taking him to the cleaners, but is a useful source of information, both about police investigations Charlie’s on the fringes of, like the Hamilton case, and the sort of information only the police are privy to. Jackie Mallon is manageress of NYB (New York Blue), the bar above which Charlie has a permanent rent-free office thanks to a favour he did for her boss, Alex, and much to her chagrin, as she covets the office space. Jackie’s “aw sugar or aw shite,” as they say in Glasgow – if she’s got a man she’s happy, helpful, and on a healthy diet; when she hasn’t, she’s permanently: a) in a bad mood; and b) eating cheesecake. Lots of it. Fortunately, there are plenty of men around NYB.

These are the people who make up Charlie’s “family” – he’s somewhat estranged from his father, who’s Chairman of the Tory Party and thinks Charlie’s wasting, “the best education money could buy.” (Private school in Edinburgh (natch) then Strathclyde Uni) They’ve decamped to England as Tories are obviously surplus to requirements up here – the old joke about there being more pandas in Scotland than Tory MPs springs to mind here! But there are other, older family secrets which are explained in the book and will help readers make sense of this splintered family situation.

To say any more about Charlie’s cases – both of which end up taking unexpected and nicely plotted turns – would lead us into spoiler territory. Suffice to say, it’s worth familiarising yourself with Charlie Cameron – and those around him – as I suspect this series is going to be massive. I’ve already read no.2, Old Friends And New Enemies, and it is even better. Expect a review of it very soon indeed – as Pat would say, I’m making the reviews a game of two halves.

My thanks to Owen Mullen and Bloodhound Books for allowing me early access to this novel.