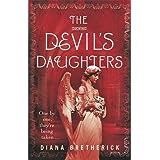 BLURB: 1888. When young Scottish scientist James Murray receives a letter from Sofia Esposito, a woman he once loved and lost, he cannot refuse her cry for help. Sofia’s fifteen-year-old cousin has vanished but, because of her lower-class status, the police are unwilling to investigate.

Accompanied by his younger sister Lucy, Murray returns to the city of Turin where he was once apprenticed to the world-famous criminologist, Cesare Lombroso. As he embarks on his search for the missing girl, Murray uncovers a series of mysterious disappearances of young women and rumours of a haunted abbey on the outskirts of the city.

When the body of one of the girls turns up bearing evidence of a satanic ritual, Murray begins to slot together the pieces of the puzzle. But as two more bodies are discovered, fear grips the city and a desperate hunt begins to find a truly terrifying killer before he claims his next victim.

THE DEVIL’S DAUGHTERS is the gripping new novel from Diana Bretherick, author of CITY OF DEVILS. A must-read tale of murder and intrigue, perfect for fans of CJ Sansom, Antonia Hodgson and Elizabeth Fremantle.

I’m a day late posting this, as the paperback copy posted to me did not appear, so I ended up buying it on Kindle!

It’s very enjoyable – a fast-moving romp of a mystery set in Turin, as was the author’s first novel, which won the Good Housekeeping Novel Competition. I know it’s something of an gardening-and-baking read, but their book pages are damn good (I always read them in the doctor’s!) I’ve had Diana’s debut, City Of Devils, on my Wish List, which I check intermittently to see if anything’s been reduced – but irritatingly that book hasn’t!

Fortunately one doesn’t need to have read the first novel to gain full enjoyment from this one – there’s just enough information given to whet your appetite on it, and fill in the info on the characters in this one, and their relationships to each other. James Murray, our hero, has returned from Turin to his home in Edinburgh for his father’s funeral. He’d been working in Italy with the eccentric Professor Lombroso (who really did exist) and Ottolenghi in the nascent field of criminal anthropology. The latter had become a close friend and confidant. He’d also embarked on a love affair with a girl Lombroso had rescued from prostitution, Sofia, but she’d ended the affair as she knew it could never be a permanent match due to their class differences.

However, shortly after his return home he receives a note from Sofia begging him for help. Knowing he cannot abandon his sister Lucy again to a dull life of churchgoing and good works with their Aunt Agnes, he takes her with him, accompanied by a Miss Euphemia Trott, a chaperone chosen by their aunt. But it seems Miss Trott may have secrets in Turin, as Lucy, a keen writer and reader of detective fiction, observes.

Sofia’s problem is more serious – her cousin, Chiara, has disappeared, as have five other girls. As they are of the lower classes, the police are dismissive and claim they must have moved on in search of better work. But Sofia knew Chiara wouldn’t leave her.

As well as this investigation, James and Ottolenghi are dragged into one of Lombroso’s typically hair-brained schemes – investigating psychic phenomena, as lights and noises had been observed at night coming from an abandoned abbey, where occult rituals involving young girls had taken place a century ago, and the place closed down. Whilst there, they discover a body of a young girl in a room in a crypt which contained mummified monks. This is shortly after a young girl’s mummified remains were found nearby in a shallow grave, with her entrails removed and put in a pot, Egyptian-style. This was shown to them by Lombroso’s friend, the policeman, Inspector Tullio, to see if Lombroso had any theories. Further bodies are found, but Chiara remains missing. Another of his experiments involves measuring the bodies, skulls, etc. of prostitutes, which brings them into contact with the dangerous Signora Concetta Panetta, a dangerous woman who appears to have a fascination with James. While doing this experiment, they hear the girls talk of a couple of their colleagues going missing – but it’s made clear by the other madam this is definitely not to be talked about.

This is hugely enjoyable as a historical mystery – Lombroso is hilariously eccentric (every chapter is headed with a quote from his book), and definitely the star of the book. He is always quick to take credit for someone else’s idea – “Exactly, Murray, I wondered when you’d think of that!”, and so on. There is also a woman who works in criminal anthropology, Madame Anna Tarnovsky, who’s come to share some of her findings with Lombroso. Despite being highly competent, she’s often sidelined by Lombroso when it suits him, because he’s frightened of her intelligence, and because she’s a woman, of course, and so has inferior intellect…!

James, desperately trying to find Chiara, and in the process perhaps win Sofia back, finds himself the target of a campaign to tarnish his name – and later, worse, presumably because he’s getting too close to something someone wants kept hidden. His sister Lucy I just found irritating, but the quiet yet competent Miss Trott added to the various mysteries unfolding.

As more girls go missing – this time from higher social standing – the police are forced to investigate. And the denouement is suitably depraved and grisly, with a most surprising person saving the day.

This is a rollicking good read, with few dull moments. One thing – I didn’t feel as though I got to know Turin much – perhaps there’s more detail in the first novel? And the end sets it up nicely for a third book in the series – but only for those who survived this one, of course!