Today we have a massive treat for all you crimewormers – a brand-spanking new hardback copy (full price £19.99!) of the latest by T.F. Muir in the DCI Andy Gilchrist series. I’ve read some of these books and, believe me, Muir can write like I can drink tea! Here’s some gen on it: 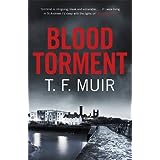 BLURB: When a three-year old girl is reported missing, DCI Andy Gilchrist is assigned the case. But Gilchrist soon suspects that the child’s mother – Andrea Davis – may be responsible for her daughter’s disappearance, or worse, her murder.

The case becomes politically sensitive when Gilchrist learns that Andrea is the daughter of Dougal Davis, a former MSP who was forced to resign from Scottish Parliament after being accused of physically abusing his third wife. Now a powerful businessman, Davis demands Gilchrist’s removal from the case when his investigation seems to be stalling. But then the case turns on its head when Gilchrist learns that a paedophile, recently released from prison, now lives in the same area as the missing child. The paedophile is interrogated but hours later his body is found on the beach with evidence of blunt force trauma to the head, and Gilchrist launches a murder investigation.

As pressure relentlessly mounts on Gilchrist, he begins to unravel a dark family secret, a secret he believes will solve the fate of the missing child.

So what do you have to do to win this cracker? Well, live in the UK, for postage costs. And you can: a) comment on any of the promotions I’ll be putting up for this competition between now and it’s closing date, 31st May; or b) tweet mentioning me, @crimeworm, and #BloodTorment. Or RT any of these messages you might see. I’ll put the entries in my favourite hat (I love hats!), and first out will be announced on 1st June.

So get commenting, or tweeting, and best of luck to you all! (I’ve always thought that doesn’t really make sense, because not everyone can have the good luck to win, but anyway, that’s what everyone says, so who am I to argue?)

Back to top
One More Chapter
Sandy's Book a Day Blog