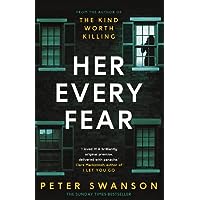 BLURB: The bestselling author of The Kind Worth Killing returns with an electrifying psychological thriller…

Following a brutal attack by her ex-boyfriend, Kate Priddy makes an uncharacteristically bold decision after her cousin, Corbin Dell, suggests a temporary apartment swap – and she moves from London to Boston.

But soon after her arrival Kate makes a shocking discovery: Corbin’s next-door neighbour, a young woman named Audrey Marshall, has been murdered. When the police begin asking questions about Corbin’s relationship with Audrey, and his neighbours come forward with their own suspicions, a shaken Kate has few answers, and many questions of her own.

Jetlagged and emotionally unstable, her imagination playing out her every fear, Kate can barely trust herself. so how can she trust any of the strangers she’s just met?

If the colossal hit The Kind Worth Killing was Strangers On A Train for the 21st century, then this much-anticipated follow-up is Swanson‘s paean to Rear Window.

So, we have Kate Priddy, an anxious, nervy young lady in a strange city, trying to learn to live normally again after a horrendous attack by her deranged ex. Obviously something like this makes you question your ability to judge who’s trustworthy. But an apartment swap by her cousin – who she’s never met – gives her a chance for a fresh start. Unfortunately, shortly after her arrival, Kate’s new neighbour is discovered dead. She, along with the police, begin to question whether Corbin could possibly have been responsible for her death just before leaving for London – especially as another resident of the building, who’d developed a crush on the dead girl and begun watching her, tells Kate that Audrey and Corbin were seeing each other – but only in the privacy of Audrey’s apartment, never out in public. Why would they behave like this, when neither of them are seeing anyone else?

This building, like the one in the Hitchcock film, provides great opportunities for many of the residents to spy on each other. It begins to appear that if Corbin isn’t a killer, someone’s certainly trying to point the finger at him. But who could be responsible?

It’s a game of cat-and-mouse, with Kate having to gather her wits together and discover if her family hosts a murderer – and if not, who is a killer – and could she be next on his list? Especially as there are some strange goings on in her apartment…

A spectacularly dramatic ending makes this a tense and hard-to-put-down thriller, with Kate needing to get over her anxiety to deal with a possible monster. As before, Swanson screws with our minds beautifully, keeping us guessing what on earth the story is. For what it’s worth, my theory was wrong! His ability to place himself inside the head of psychopaths is somewhat worrying, if a treat for us thriller fans. This doesn’t quite have the plotting perfection of The Kind Worth Killing, but such books are exceptionally rare. I’ve been raving about it since it came out, and I haven’t met anyone who hasn’t adored it. This is, however, a good, solid thriller in it’s own right, and is certain to provide plenty of sleepless nights.

Thanks to Faber & Faber for my copy of this book to review in exchange for my honest opinion.

11 thoughts on “Blog Tour – Her Every Fear – Peter Swanson”