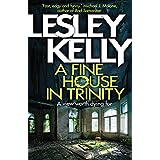 BLURB: Joseph Staines, an unemployed chef, has left Edinburgh with the tallybook of the late debt collector, Isa Stoddart. Her son Lachie thinks Stainsie killed her, but Lachie has apparently committed suicide. To his surprise, Stainsie is the sole beneficiary of Lachie’s will and has inherited a dilapidated mansion. Isa’s debtors and the local priest who paid Stainsie to leave town want him gone. A certain young mum, Marianne (whose uncle, Wheezy, is Stainsie’s drinking buddy) does too, and his old school-friend, Detective Sergeant Jamieson, wants to interrogate him about the deaths. Why are the lawyers lying to him, and who is the bruiser asking about him down the pub? 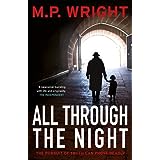 BLURB: “It’s quite simple Mr Ellington. When you find Fowler, just ask where we can find the truth.”

With these words, private detective JT Ellington embarks on a seemingly simple case of tracking down a local GP with a dubious reputation and retrieving a set of stolen documents from him.

For Ellington, however, things are rarely straightforward. Dr Fowler is hiding a terrible secret and when he is gunned down outside a Bristol pub, his dying words send JT in pursuit of a truth more disturbing and deadly than he could possibly have imagined.

All Through The Night is the second in the Heartman series, the first being – you guessed it – Heartman. It’s the story of a Bajan private investigator (although he prefers “Enquiry Agent”), now living in the St. Paul area of Bristol, and the trials and tribulations he gets himself into while solving the cases brought to him by his clients. In this book, he’s been short of work for a while, so when an Ida Stephens of The Walter Wilkins Orphanage comes to him and asks him to locate an elderly Jamaican doctor called Dr. Theo Fowler and get him to return some documents – namely the death certificates of children – which he has taken from the home and return them, he can’t turn the £50 down. There’s also an extra £100 for him when the job’s done. She gives him £500 for the good doctor, as encouragement to comply. She has one other request – “When you find Dr. Fowler, ask him where the truth is.” Strange question, seemingly innocuous in itself, but the answer’s part of the deal. So, good money for not much work – that in itself should raise eyebrows…As they say in Russia, the only free cheese is in a mousetrap.

Asking around the Caribbean community, mostly centred in the St. Paul area of Bristol, it seems the Doc is very well known indeed – as the man for women to go to when they find themselves in trouble. He’s also an alcoholic. Through one of his cousin Vic’s prostitute friends – or possibly employees, he arranges a meeting with him in a pub and telephones Mrs. Stephens to tell her where and when it’s to take place, thinking that the job will probably be completed that night. However, Dr. Fowler spots a man he’s terrified of in the front bar, and they attempt to leave. As they try to flee in J.T.’s car, the man chases them, and pulls a gun, shooting the doctor. Before he dies though, he bequeath his £500 to J.T., and gives him keys and instructions on where to find the death certificates.

The death certificates are hidden in the store room of a swimming pool. Also there is a little girl – called Truth. That is what Ida Stephens strange question referred to. She tells him enough that he’s definitely not inclined to return her to the orphanage, and his opinion of the Doc as a selfish man only out for himself is altered. And so begins a desperate road journey for a middle-aged black man and an 8-year-old white girl – a duo who’re obviously going to stand out.

When they realise their first hideout has been revealed to the men, who beat up Loretta, J.T.’s friend, it makes it personal for her uncle, where they were staying. He takes them to his friend Laz, who he served with in the Korean War. They batten down the hatches of Laz’s lonely pub (very Jamaica Inn), and wait for the enemy to appear…

J.T. is a wonderful creation, and there are other great characters – his cousin Vic, who always has to bail him out of trouble – he’s the type to shoot first and ask questions later; Benny and Estelle, and her mother Cecile, with whom J.T. and Truth seek refuge in a village on the coast; Benny’s old friend from the Korean War, Laz – I got the impression the two of them wanted one last shootout before they were too old; and J.T.’s downstairs neighbour, Mrs. Pearce, who also takes care of Truth for a spell, particularly stand out for me. The relationship that slowly grows between J.T. and Truth is delightful – what they go through beggars belief. But we can see from it what a decent man J.T. is, and what a good father he must have been to his late daughter, Amelia.

This series is unique in so many ways – having a black protagonist when racism was rife; the setting of Bristol (I’ve always wanted to go there but it’s so far away!); the great Bajan patois they use; and the large cast of highly original people – including the men chasing them – that Wright has created. The novels of Colin MacInnes (rarely read these days; Absolute Beginners is the best known) sprung to mind when I was reading this, as it also features the experience of the immigrant community, albeit in London. I think Mr. Wright has probably toned down the racism – but it’s a joy to see the strong support J.T. has. He’s not fond of violence (unlike Vic, who is always up for a fight) but knows it’s sometimes necessary, especially when you’re dealing with men like the ones in this book.

This is a refreshingly different entrant to the crowded world of crime fiction – I wish I’d caught Heartman when it came out; I somehow missed it but I’ll definitely get a copy of it now. This was a book that kept me up, gripping the pages tightly, urging our hero on, as if he were real. That doesn’t happen often to this crime fiction fan! So I’d venture that this is a book well worth reading.*

*At time of writing this book is only 98p on Kindle – well worth it!

With thanks to Black and White Publishing for providing me with a copy in exchange for an honest review.