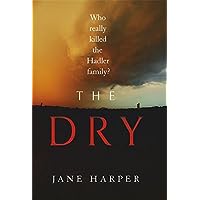 Amid the worst drought to ravage Australia in a century, it hasn’t rained in small country town Kiewarra for two years. Tensions in the community become unbearable when three members of the Hadler family are brutally murdered. Everyone thinks Luke Hadler, who committed suicide after slaughtering his wife and six-year-old son, is guilty.

Policeman Aaron Falk returns to the town of his youth for the funeral of his childhood best friend, and is unwillingly drawn into the investigation. As questions mount and suspicion spreads through the town, Falk is forced to confront the community that rejected him twenty years earlier. Because Falk and Luke Hadler shared a secret, one which Luke’s death threatens to unearth. And as Falk probes deeper into the killings, secrets from his past and why he left home bubble to the surface as he questions the truth of his friend’s crime.

Sometimes, participating in a Blog Tour can be a double-edged sword. Sure, you get to read the latest books, usually a real book, and you get additional hits on your blog from participating in a high-profile tour. But the fact is, sometimes you feel the pressure is on to say you really enjoyed the book, even if it was just kind of average, as you know the publicist, and very possibly the author, may be reading your thoughts. I’m a bit of a sop – I hate the thought of hurting author’s feelings, after all the time and work they’ve put into their “baby.” After all, I know how devastated I’d be if it were me!

No such worries here. Despite this being the author’s debut novel, years of working as a journalist at national newspapers in the UK and her new home, Australia, have honed her skill with words. However, we all know that’s not enough – a great story is crucial, and The Dry is a bloody fantastic story. Not in a million years would you peg this as a debut.

The story begins when Aaron Falk receives a message from his teenage best friend’s father, demanding his presence at the funeral of his son, Luke Handler, daughter-in-law Karen, and grandson Billy. The police from the nearest large town, Clyde, came to Kiewarra, the rundown bushtown where they lived, and their conclusion was that it was a case of family annihilation: Luke shot his family – sparing only his 13-month-old daughter Charlotte – then drove to a clearing, and turned the gun on himself.

Aaron wouldn’t normally have appeared at the funeral – he and his father were run out of town 20 years previously, after the death of one of Aaron’s friends, Ellie, by drowning. All it took for suspicion to fall on them was a very small thing, that could have meant something, or nothing. Since then, Aaron and his father had existed, little more as country folk out of place in the city of Melbourne, with Aaron joining the police, specialising in financial crimes. The last thing he wants to do is return to a town with so many memories.

While there, Luke’s parents, Gerry and Barb, ask him to run his eyes over the farm’s books to see if it was impending financial disaster that caused Luke to do what he did. Most of the farms in the area are in a bad way financially, due to a drought that’s the longest in living memory. He agrees, as he feels obligated to the family that were so good to him when he was younger. He also meets the new(ish) local policeman, Raco, who admits he has doubts about the way the investigation was run, and they end up teaming up to see if they can discover anything the Clyde police missed.

And like any small town anywhere, Kiewarra has it’s secrets, some relevant to the investigation, many not. Hanging over their investigation is the spectre of Ellie’s death – 20 years on and grudges are still borne, and not just by her alcoholic father and cousin.

There are plenty of suspects, with lots of potential motives, and Aaron and Raco make a likeable and efficient investigative duo. To be honest, I’d have galloped through this book in a day or two, but eked it out for longer as it was SO enjoyable. Great characters, amd the classic trope of the small community, cut off from elsewhere, and, we know, containing our villain. Also the added “bonus” mystery of what happened 20 years previously, the events of which we are drip-fed in short extracts.

If we get even, say, ten books of this quality this year, I’ll be a very happy crimeworm. Don’t miss The Dry – you’ll only be kicking yourself when the rest of the fiction-loving world are raving about it (and it’s not just for crime fans; the quality of the writing lifts it above any genre pigeonholing.) Buy it, or borrow it, but whatever you do, ensure you read it!

Purchase it on Amazon UK or support your local bookshop or library.

Many thanks to Little Brown Book Group, who sent me a copy of this book in exchange for an honest review.

The Quiet Geordie
David Pettyjohn
The Most Sublime

Just a quiet knitter with an addiction to books