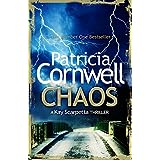 On a hot late summer evening in Cambridge, Massachusetts, Dr. Kay Scarpetta and her investigative partner Pete Marino respond to a call about a dead bicyclist near the Kennedy School of Government. It appears that a young woman has been attacked with almost super human force.

Even before Scarpetta’s headquarters, the Cambridge Forensic Center, has been officially notified about the case, Marino and Scarpetta’s FBI agent husband Benton Wesley receive suspicious calls, allegedly from someone at Interpol. But it makes no sense. Why would the elite international police agency know about the case or be interested? With breathtaking speed it becomes apparently that an onslaught of interference and harassment might be the work of an anonymous cyberbully named Tailend Charlie, who has been sending cryptic communications to Scarpetta for over a week.

Stunningly, even her brilliant tech savvy niece Lucy can’t trace whoever it is or how this person could have access to intimate information few outside the family would have.

When a second death hundreds of miles south, shocking Scarpetta to her core, it becomes apparent she and those close her are confronted with something far bigger and more dangerous than they’d ever imagined. Then analysis of a mysterious residue recovered from a wound is identified as a material that doesn’t exist on earth.

In this latest in the bestselling series featuring medical examiner Dr. Kay Scarpetta, Cornwell shows us once again why she is the world’s number one bestselling crime writer, mistress of the shocking turns, delicious thrills, and state-of-the-art forensic details that all fans of suspense have come to love.

Apologies for this piece being late – I woke up on Saturday morning with the most agonising sore throat and headache, which continued into today. Mr C must have had the most peaceful weekend ever (which would have suited him, with it being an F1 weekend and there being a Rangers v. Celtic semi-final – the living room was worryingly quiet, until a cheer near the end indicated he’d be in a good mood the rest of the day!)

So, the word Chaos about sums up my attempt to finish the book early yesterday and get a review up. But I come bearing good news – for all you Cornwell fans of old, like me, this appears to be much more like her first few books. This one happens pretty much in real time. It’s shockingly hot for Cambridge, Massachusetts, and people are collapsing (and dying) of heat stroke. But that’s not what’s caused the case Scarpetta’s called out to in the middle of her monthly “date night” dinner with Benton. Intriguingly, at the same time Benton Wesley’s phone rings and he’s called out on bureau business.

Marino arrives to pick her up, and when they get to the scene Scarpetta’s pretty sure she recognises the victim – a cyclist in her early 20s she’d encountered and spoken to twice that day. All the signs speak to the victim being struck by lightning – except there wasn’t any in the area. To add to the problem, their scene has been disturbed, although in fairness it was by attempted do-gooders – twins, who appear to suffer from alcohol fetal syndrome and the poor development of intelligence associated with it. They’d dragged the victim off the cycle track, out of the way of others, and taken a few souvenirs from the scene, including her iPhone, which they used to call emergency services.

Anyway, the part I like best about the Scarpetta books was next; something we’ve not had for a wee while – she and Marino, just working together, bouncing ideas off each other while they secure the victim and any evidence in the immediate area of the body. They just have so much more to say to each other than Kay and Boring Benton, who’s romantic, and loving; remembers anniversaries and buys jewellery and posh perfume you can only get in Italy, blah, blah – but who never appears to laugh or do anything spontaneous. We all know Marino has a crush on Kay, but, for all his faults – like being an unreconstructed male chauvinist! – he’s FUN and funny, as well as great with Desi, Lucy and Janet’s adopted son. However, according to Benton, he’s moved on – to someone a little bit to close to home for Kay’s liking…Another thing this book has in it’s favour is that there’s not too much of Lucy The Genius and all her extortionate “toys” in it, who drives me potty, although Janet and Desi seemed to have shaved off some of her really sharp edges – she’s not as much of a thrill-seeker now she has a family waiting on her to come home.

Tantalizingly, there are two other victims of these bizarre deaths by electrocution, and one of them most definitely appears to be a target to get at Scarpetta – and there’s only one person we all know who’s twisted enough to attack her in such a vicious way, with no concern for others – they’re just collateral damage. Also, for the past week, Scarpetta’s been getting e-mails from know someone who calls himself Tailend Charlie, but, unlike her usual dose of cranks, he appears to know details of Scarpetta’s childhood, like nicknames from school. Are these two twisted individuals linked, or even one person…?

The denouement comes very suddenly, and is played beautifully. However, there’s a final twist that absolutely made my jaw drop. Chaos indeed…

With thanks to the publisher HarperCollins for my copy of the book in exchange for an honest review.