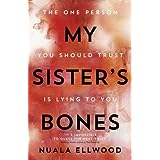 BLURB: Kate Rafter is a high-flying war reporter. She’s the strong one. The one who escaped their father. Her younger sister Sally didn’t. Instead, she drinks.

But when their mother dies, Kate is forced to return home. And on her first night she is woken by a terrifying scream.

At first Kate tells herself it’s just a nightmare. But then she hears it again. And this time she knows she’s not imagining it.

What secret is lurking in the old family home?
And is she strong enough to uncover it…and make it out alive?

I’ve had one of these flu-type things all week that make you just ache and want to sleep all the time, hence the few days behind this review is. I really did think I’d be awake and compos mentis more than enough hours to read and review My Sister’s Bones by Nuala Ellwood, which on paper looked like a straight domestic noir/psychological thriller job, the kind that takes a few hours – 2-3 if you’re a fast reader, which I’m not. But NO! this book proved to be so much more…

It’s about a disfunctional family, although it didn’t become one until the baby of the family, Timmy, drowned on a day at the beach. The father of the family blamed the mother (who was further up the beach with Sally, the middle child) and took to getting drunk, and beating her and the mouthy Kate, the older sister who was paddling with the boy that day, and he found solace in a bottle until it killed him. While their mother, Gill, and Kate were blaming themselves for Timmy’s early demise – which was really just a tragic accident – younger sister Sally was out running a bit wild, and fell pregnant at 14, just as Kate was leaving for university. At that point, a schism opened up between the sisters which never really mended.

Sally took after her father to a certain extent, and enjoyed a glass of wine, but despite that, she found a good, supportive partner in the boy-next-door, Paul, who married Sally and took on Hannah as his daughter. They seemed a happy family when Kate saw them on her occasional trips back, although Kate was aware of Sally’s growing drinking problem. But when Hannah became a teenager, she rebelled. Sally saw it as nothing to worry about, through the bottom of her (increasingly large) wine glass – after all, hadn’t she done the same? Then Hannah ran away. But she dropped in on her Aunt Kate in London, then sent a postcard to her mother and Paul, saying she was going to work abroad. So what could Sally do? On her own all day, sacked from her job in a bank, she could drink, just like her Dad. But she wouldn’t hurt anyone, like him; she was just filling up the loneliness with wine.

Meanwhile, Kate worked as a war reporter, most recently in Aleppo, Syria. It’s as though, unable to save her brother, she did her best to tell the world about others in need. However, she got too close to a family they were staying with in Aleppo, and when the young boy died, Kate couldn’t cope. Around this time she was called back to the UK to deal with her mother Gill’s affairs after she’d died, and Kate had to see her solicitor and sign papers. It was Paul who helped her out throughout her time in Herne Bay – Kate had no illusions about the state of her sister, who by now spent all her time in the conservatory, not washing or dressing much – just drinking. Kate barely saw her.

That’s part 1 of the book, which I actually found quite slow and long-winded. Later in the book is when it gets more dramatic. While she’s home she keeps seeing a young boy of 3 or 4 in her garden, and accuses her Iranian neighbour Fida – Paul’s tenant (when his parents died he’d kept the house while him and Sally moved to a nicer part of town) – of mistreating her son, and keeping him locked in the shed. After several such altercations and disturbances of the peace, the police are called, and a psychiatrist, Dr. Shaw, to ascertain whether Kate is a danger to herself or anyone else. These conversations with the psychiatrist are peppered throughout the book from the very start, revealing a lot about Kate and her past, both recent and distant. Dr. Shaw assumes these physical and vocal delusions are symptoms of Kate having PTSD, and the visions are of Nidal, the young Syrian boy who was killed.

I really can’t add any more regarding the storyline as there be spoilers ahead! But here are when things start to speed up considerably. There’s a death, which is the catalyst for lots of secrets unwinding. It’s definitely one of the best-plotted and substantial psychological thrillers I’ve read – in fact, I think lumping this book in with much of the genre would be doing it a grave disservice. If, like me, you find it a tad slow-going at the beginning, I urge you to stick with it, as there are plenty of shocks, surprises and scares in store – Ellwood’s simply setting the scene for the real action to begin…!

So if you consider psychological thrillers/domestic noir one of your favourite genres, then this is definitely one of such books not to be missed. That would be a crime in itself!