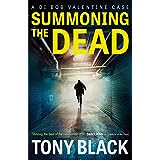 BLURB: “We have a dead child, and a crime scene that has been remarkably well kept for us.”

A young child lies mummified in a barrel. His hands, cable-tied, appear to be locked in prayer. As forensic officers remove the boy they are in for an even bigger shock – he is not alone.

With his near-fatal stabbing almost a memory, DI Bob Valentine is settling back into life on the force but he knows nothing will ever be the same. Haunted by unearthly visions that appear like waking dreams, he soon understands he is being inducted into one of Scotland’s darkest secrets.

When the boy in the barrel is identified as a missing child from the 1980s, it re-opens a cold case that was previously thought unsolvable. When further remains are unearthed, the facts point to a paedophile ring and a political conspiracy that leads all the way to the most hallowed corridors of power.

Tony Black has been shortlisted for the 2016 Crime Writers Association Dagger in the Library Award, which covers the entire body of an author’s work.

Summoning The Dead is book three in the DI Bob Valentine series, following Artefacts Of The Dead and A Taste Of Ashes. Valentine is based in Ayr, and in this book has not long returned to work after being stabbed in the heart. His wife wants him to either transfer to a desk job in the police, or leave altogether, but Bob knows that’s not an option – his wife’s shopping addiction (and the fact that she’s a stay-at-home mum/housewife) has left them in debt, plus their eldest daughter will (hopefully) be going to university in a few years time, so they need every penny they can get. Also, Bob knows – but doesn’t mention to his wife – that he wouldn’t be happy dealing with anything but murder and serious crime. And this crime is as serious as they come…

While digging up farmland near Cumnock to create a new road, a JCB unearths a metal drum which appears to contains the body of a child. When the forensic officers prepare to move the drum to the mortuary, it appears they have not one but two dead children – boys, around 10 or 11.  Clearly there was no expectation of the drum being found for a long time, if ever.

At one point nearby there was a boys’ home called Columba House. It was shut down in 1989 after a child abuse scandal – when one of the younger policemen who hadn’t heard anything about the place asked, “Scandal, sir?”, he was met with, ” It was a boys’ home, of course there was a scandal.” Sad but true. Some of the staff were imprisoned; however, many still in the police force, and others retired, who remember it saw the investigation as a whitewash, with the staff sacrificed to ensure the protection of men of standing in the community. Strangely, the local MP, Andrew Lucas, shot himself around the time of the case, to be replaced by a Gerard Fallon.

A search through missing persons files in the basement reveals the identity of the two boys – I was surprised it took one of the officers so long to come up with the files. With a specific date of 1984, in a place the size of Cumnock, I wouldn’t have thought two missing boys would be forgotten by anyone – certainly not police officers. Still, I suppose they’re required to be thorough.

It’s clear from their clothing and the belongings concealed in the barrel that one of the boys was from a fairly well-to-do background – Rory Stevenson. The other was from the home – Donal Welsh.

I haven’t given you any spoilers, but this is a timely story, although probably not one for those upset at the death of children in stories, although there are no violent scenes. What I found particularly poignant, and what lingered with me a long time after I’d finished the book, was that Donal Welsh had no-one to remember him or mourn for him, bar the officers who’d dealt with the case. No child should be forgotten !ike that. This helped me understand Valentine’s obsession with his job – to speak for the victims who can’t speak for themselves.

Many thanks to Black & White Publishing for my copy of the book, in return for an honest review.

Now I’m really nosy about what people are reading – I’m the one who’s trying to see the cover of the book you’re reading on the train, just in case it’s something sensational…Anyway, Tony was kind enough to spill the beans on what he enjoys reading, as well as letting us know what’s on his bedside cabinet at the moment. Over to you, Mr.Black:

If there’s such a thing as a typical reader, I doubt it’s me. I get the impression that publishers would like to mould readers like they mould writers — get them hooked on one type of book, or genre, early and keep them there. I’m not necessarily mocking that, there’s good reasons on both sides for sticking with what you know.

If your thing’s crime or romance of sci-fi and you like to stay with that, great, but I never could. My reading, a bit like some of my writing, is all over the place.
I’m not a big contemporary fiction reader, but when I do find an author I get along with I tend to become a life-long enthusiast. I’ll pick up everything by Ken Bruen. Before I got into crime fiction I actually read Bruen’s Jack Taylor novels almost as straight fiction, filtering out the crime. I was far more interested in Jack’s self-destruction and in the chorus characters like the chain-smoking priest Father Malachy.
The crossword puzzle element of crime fiction doesn’t do much for me. McIlvanney used to describe this kind of book’s purpose as “filling a few hours on a train’’. Again, fine, if that’s what you’re after but I’m much more interested in exploring a character’s hinterland, psychology and motivations. Writers like Allan Guthrie, and McIlvanney himself, do this so well in the crime genre.
I just read Cormac McCarthy’s The Road for the first time, it’s been out for a good few years but I suppose that’s about as up-to-date as my fiction reading really gets.  I found it gripping, I like dystopian stories anyway, but what really hooked me was the relationship between the father and son. A very moving and thought-provoking book.
I’m a bit of a sucker for stylised writing. I’ve been dipping into George Mackay Brown’s short stories lately and he’s a great stylist. He uses a lot of simile and metaphor, which is not very fashionable today, but I just love his style. At the other end of the scale is Irvine Welsh; GMB would have spewed at Welsh’s language but I just laugh my ass off.
My reading leads me to writer biographies a lot and I tend to find the writers I like most on the page — Carson McCullers, Hemingway, The Beats — turn out to be the kind of people I’d least like to go for a pint with, interestingly enough. This rule is reversed for Mr Bruen, though, he is, of course, a great bloke to go for a pint or two with.
:: Tony Black’s TBR list currently includes: Ironweed by William Kennedy; The Short Day Dying by Peter Hobbs; Dangerous Corner by Maurice Vlaminck; and, Bill Hicks: Agent of Evolution by Kevin Booth with Michael Bertin.