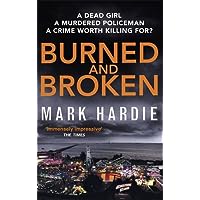 BLURB: A vulnerable young woman, fresh out of the care system, is trying to discover the truth behind the sudden death of her best friend.

The charred body of a policeman – currently the subject of an internal investigation – is found in the burnt-out-shell of his car on the Southend seafront.

To DS Frank Pearson and DC Catherine Russell of the Essex Police Major Investigation Team, the two events seem unconnected. But as they dig deeper into their colleague’s murder, dark secrets begin to emerge.

Can Pearson and Russell solve both cases, before more lives are destroyed?

A brand new author, with a brand new series, set in Essex, in Southend-on-Sea. The book opens dramatically with the murder of a cop, DI Sean Carragher, burnt in his car, and we soon discover he could be somewhat dodgy, and so have built up a multitude of enemies.

Our main characters are DS Frank Pearson and DC Cat Russell. Pearson’s one of these “live for the job” types, with a marriage in its death throes, whereas Cat’s from a shady gangster-type family, who’ve disowned her since she joined the police. As this is the first book, we didn’t get to know them that well, especially Cat, but Frank seemed an intriguing character. Their relationship struck me as more mentor-mentee. They weren’t exclusively partnered together – she usually worked with the late DI Carragher, although as this book is labelled on Amazon: “A Pearson and Russell Novel,” presumably that changes.

Our other main characters are Donna and Malc, with Donna just out of the care system, but both still kids. She was good friends with Alicia Goode, who died, and, from what I can ascertain, whose death prompted an investigation into the Abigail Burnett Children’s Home, and the possibility of sex grooming taking place there. Donna’s angry Alicia’s death was ultimately branded accidental, and drags the somewhat gormless Malc along with her as she seeks to punish the man she believes responsible.

Hardie doesn’t balk at controversial – and highly pertinent – storylines, like the grooming for sex of children in care, the mental health issues of young vulnerable people, coppers (possibly) on the take, etc. There’s a smörgåsbord of sleaze, and sleazy people, throughout, and I found it all horribly realistic. And when it comes to nightclubs, it so often comes with the territory. One particular club, which has had two fires, both vaguely suspicious but nothing the fire investigation department, police, or insurance company could prove, is owned by Pearson’s (probably) soon-to-be-ex-brother-in-law, and I loved Pearson’s description of Terry Milton:

“He had the sartorial elegance of a used car salesman, Pearson thought. Or a professional darts player.”

The club ends up part of this investigation when a man called Sickert Downey, who ran the children’s home from whence the children under suspicion of abuse came, and was given “early retirement” at the conclusion of the investigation, hanged himself (…or did he?) from the scaffolding outside PSYgnosis, Milton’s club. Was his choice of places to die simply a matter of convenience, i.e. the scaffolding – or was he trying to say something?

So – gritty; realistic; highly readable – this book has all the hallmarks of being the first in what could be a great series. Even the peripheral characters have their quirks – like Lawrence, who rarely leaves his desk, fed up with the job and marking time to retirement. Or DCI Roberts, with his penchant for Extra Strong Mints, and his habit of fidgeting with things on his desk when they’re discussing a case. I look forward to getting to know them all better.

There are plenty of surprises to be found at the conclusion too – not just in who was responsible for the death of DI Sean Carragher, and why, but from other parts of the storyline too. Mark Hardie has the perfect mind for creating great police procedurals. I very much look forward to reading more of his work.

NOTE: This book is currently £1.99 on Kindle, so do snap it up before it goes up. The paperback isn’t available until May.

My thanks to Sphere Books for my copy of this book in return for my honest review.