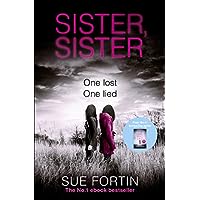 Clare thinks Alice is a manipulative liar who is trying to steal her life.
Alice thinks Clare is jealous of her long-lost return and place in their family.

One of them is telling the truth. The other is a maniac.
Two sisters. One truth.

I do adore a good domestic noir psychological thriller, although I must admit many of them are the equivalent of a book MacDonald’s – quick, satisfying at the time, but often somewhat forgettable. I’m not disrespecting any authors here – it’s quite a feat to have your readers staying up until all hours muttering, “…one more chapter,” knowing they’ll be zombies in the morning!

So, the set-up is this – 20 years previously Clare and Alice’s father took Alice, his younger daughter, to the United States, ostensibly for a holiday – but never returned. Private investigators hired by the girls’ mother with the help of Leonard, a longtime family friend and lawyer (who’s also Clare’s boss – she’s now a lawyer too) didn’t find them. They gave up all hope of seeing Alice again until, 20 years on, a letter arrives from her. Then Alice arranges to come and visit. It’s going to be happy families, at last! Except, of course, it’s not. Because then it’d be some kind of chick-lit novel I’d be avoiding like the Plague! No, I definitely prefer my characters on the nasty side…

Clare doesn’t take to Alice from the word go. Maybe, as her family keep telling her, it’s simple jealousy over Alice borrowing some clothes without asking. Or maybe it’s the easy way she touches Clare’s husband Luke’s arm, or comes down to breakfast wearing only a skimpy T-shirt. But when Clare finds Alice in Luke’s studio in the middle of the night (he’s an artist; she’s always been the main breadwinner) posing for a portrait “as a surprise for Mum” she’s apoplectic with rage.

Then things start happening – hyper-organised Clare loses a hugely important file, getting her in trouble at work. Is all this stress affecting her? Did she in fact leave it where it where it was found? I don’t want to put in any spoilers, but let’s just say everyone is starting to look at Clare with new eyes – mistrustful ones.

Thank goodness she has her colleague, Tom, to vent to. After a romance at university, they’ve settled into an easy friendship and good working relationship – in fact, Clare suggested him for his position with Leonard. He seems to be the only one on her side; at home she’s the baddie, with even her daughters fearful of her when she arrives home lest she sparks another row.

Clare ultimately decides she needs to know the full truth about Alice, not just her version – after all, she’s just appeared, after 20 years absence. What has she been doing in the meantime? Did their father really die just a few months ago? If it wasn’t for her unmistakable blue eyes, seen on treasured childhood photographs, she could be anyone. And when Clare has the truth, if any of it differs from Alice’s version, she’ll know her sister to be the liar she suspects her to be. So it’s Operation Alice…

This book gets wonderfully more and more dramatic as it progresses, and your nails will get shorter with the stress! The family dynamic – both pre- and post-Alice’s arrival – comes across as pretty realistic, but what I most enjoyed was the spats between the two sisters, which got progressively worse as time went on and their “relationship” deteriorated more and more. It turns out they both can give as good as they get!

I don’t know how I managed to miss The Girl Who Lied last year, but I’m pretty sure from reading the blurb that I’d love it. And at only £1.99 currently on Kindle, Sister, Sister is definitely worth snapping up before the price increases! Plus Sue Fortin is certainly an author worth watching in this genre.

My thanks to HarperCollins and NetGalley for allowing me to read this book in exchange for my honest review.