So – the latest Clare Mackintosh! An author whose first couple of books you read and loved; you’ve got all the others in your TBR pile. How did Hostage measure up?

Oh my goodness! I’ve been looking at a lot of the books I own and have read, and – to paraphrase Crocodile Dundee – thinking, “That’s not a book! This is a book!” (meaning, of course, Hostage!) I’ve got to admit – embarrassingly – I’d sort of forgotten how damn good Clare Mackintosh is at the little details that build up into a great book. She’s quite brilliant at the minutiae that builds up to make everyday lives, and fill her books, and their characters, with such a strong sense of authenticity.

Hostage is about an air stewardess who’s on the inaugural non-stop London to Sydney 20-hour flight, and is threatened by an anonymous hijacker who wants her help bringing down the plane – or they’ll kill her daughter. Is that the plot, in a nutshell?

Absolutely – and what a fabulous premise, in one sentence, that is, isn’t it? It makes for a tense as hell situation; one which has you pondering exactly what you would do in her position at many points in the novel. And the fact that the vast majority of the book is set on the flight makes it as claustrophobic as hell too! Occasionally books set mainly in one space can get a little bit dull, or same-y, but not this one – Mackintosh manages to keep you turning the pages long past your bedtime! Not that that should be a surprise to the army of fans she’s built up over the last few years.

Tell us a little bit about Mina, the stewardess and central character…

Obsessed about aeroplanes from an early age, Mina has her dream job. Her family is police officer Alan – who comes across as shifty from the very start; my instant thought was, “affair,” and it seems like that’s what Mina thought too as they’ve recently taken to sleeping in separate rooms. The only reason they haven’t actually separated is because adopted daughter Sophia has “separation anxiety,” amongst a host of other psychological difficulties. These two are pretty much Mina’s world, as obviously her job takes up most of the rest of her life. It also keeps her sane, as Sophia is a pretty demanding child – and so takes up most of the rest of it. But she utterly loves her daughter, that’s clear.

What would be your selling line to readers thinking of picking up Hostage be?

Buckle up for take off! And hold on tight – you’re in for a hell of a trip! (And clear your diary before you begin reading…) Actually, that’s three lines – here’s a fourth: Hostage is all killer, no filler.

Go and buy or borrow this book now! It’s the perfect summer read!

I’d like to thank Anne Cater at Random Things Tours and Compulsive Readers for the invitation to participate in this blog tour, and Sphere Books for the ARC. That has in no in way affected my opinion of the book, and this is an honest review.

BLURB: You can save hundreds of lives. Or the one that matters most.

A claustrophobic thriller set over twenty hours on one airplane flight, with the heart-stopping tension of The Last Flight and the wrenching emotional intensity of Room, Hostage takes us on board the inaugural nonstop flight from London to Sydney.

Mina is trying to focus on her job as a flight attendant, not the problems of her five-year-old daughter back home, or the fissures in her marriage. But the plane has barely taken off when Mina receives a chilling note from an anonymous passenger, someone intent on ensuring the plane never reaches its destination. Someone who needs Mina’s assistance and who knows exactly how to make her comply.

Today we’re getting a chance to look over the shoulder of Sherri Smith, author of Follow Me Down, which I’ve just finished…and utterly adored! Here’s the lowdown on the book, then Sherri’s piece on what she’s been reading and watching – when she’s not writing fantastic suspense-filled novels, obviously! My review will follow shortly. 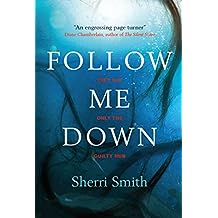 Mia has built a life for herself far from the small town where she grew up. But she is forced to return home when her brother goes missing. Once the golden boy of the community, Lucas has disappeared the same day as the body of his student is pulled from the river. Unable to reconcile the media’s portrayal of Lucas as a murderer with her own memories of him, Mia is desperate to find another suspect. But if Lucas is innocent, why did he run?

You know how when you drink wine, you’re supposed to start light and go dark? Well I do the opposite with my reading. I go from dark to light. I just sleep better that way. I read three to four books all at once and they’re sort of scattered about the house because I have small children and like to exploit any opportunity to read by having a book within reach.

Last night, I cracked the spine of The Monogram Murders by Sophie Hannah (a Hercule Poirot mystery seems a safe bet to drift off to sleep to.) I am also reading Little Deaths by Emma Flint (books with dead children are morning reads). The writing is gorgeous and the mystery is really compelling. I also just started The River at Night by Erica Ferencik, and I’m already hooked (it’s a solid afternoon read!)

When it comes to sports, like any decent Winnipegger, it’s hockey and the Jets all the way (even if it’s a bumpy, disappointing ride.) Plus, beer always tastes better when hockey is involved!

As for what I’m watching, I’m really loving Zombie on Netflix right now. It has all of my favorite things in each episode, a murder mystery, a zombie and very witty banter. I don’t know what I’m going to do when I run out of episodes.

A laundry list of other shows I will binge-watch are Black Mirror (when will there be more!?!) Orphan Black, The Killing, Broadchurch, Jessica Jones and Orange is The New Black. I can hardly wait for the new season of House of Cards for obvious reasons, because it’s so good! I also have a few true crime documentaries queued up, which always help get my mind working.

So these are some things I’m reading and watching right now. Thanks for asking! I am always open to new suggestions, so please message me if you have any because I hate missing out.

So, what do you think of Sherri’s picks? The River At Night is on my must-buy list, and I’ve started Little Deaths. And I like a few books on the go at once… Love to hear what you think!