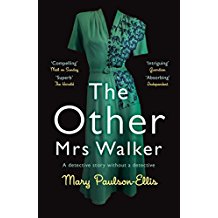 BLURB: An old lady dies alone and unheeded in a cold Edinburgh flat on a snowy Christmas night. A faded emerald dress hangs in her wardrobe; a spilt glass of whisky pools on the floor.

A few days later a middle-aged woman arrives back in the city she thought she’d left behind, her future uncertain, her past in tatters.

She soon finds herself a job at the Office for Lost People, tracking down the families of those who have died neglected and alone.

But what Margaret Penny cannot yet know, is just how entangled her own life will become in the death of one lonely stranger . . .

Billed as “a detective story with no detective,” The Other Mrs Walker tells the story, initially at least, of Margaret Penny. Margaret has returned to Edinburgh after 30 years of living in London, to where she ran away at the age of 17. She returns, tail between her legs: unemployed, as she’d stolen large sums of money from her previous employers; homeless, as the flat she’d rented for years was being sold and her tenancy ended; and heartbroken, as she discovered that the man with hair the colour of “wet slate” didn’t belong to her but in fact to another family – his wife and two children.

Bedding down in her mother’s box room, she needs a job quickly. This is where “the Edinburgh way” proves useful – her mother’s friend, Mrs Maclure, who’s known to everyone, recommends her to the Office for Lost People. Their job is to track down possible family members of those who have died with no obvious close relations – mainly, it has to be said, so the City Council doesn’t get billed for burying them. So Margaret is given the task of finding out the history of Mrs Walker, who may or may not have been married – rather like her own mother Mrs Penny (not, in her case!) Again, it’s the Edinburgh way. And Margaret turns out to be something of a natural at her new job…

In between the chapters about Margaret’s dogged investigations, we head all the way back to 1929, initially, and learn about the Walker family, and a girl called Clementine, named after the song, who loved oranges. As we revisit this growing family periodically, I wondered how it could be that so much misfortune could be visited upon one family – death, insanity (a result of grief), a father going to find work in the US and getting no response from home… Meanwhile, a pair of ruthless individuals had taken up residence with the remaining offspring, and were makings money from them however they could, regardless of how immoral their schemes were.

Certain items reappear time and time again in the book, like oranges, and an ornamental cherub with a missing arm.

This is a wonderfully original debut, which demonstrates how families can fracture, and fall apart – and that, ultimately, it’s not impossible that they’ll meet again. Not that that guarantees any happy ever afters… It also shows how desperation can cause anyone to forget about pride and self-esteem – and other members of your family. The children are brought up with the understanding that they must look after themselves, asmakingss no-one else to take responsibility, not even siblings.

If you like dramas, with some mystery, set – even partly – in wartime, like Lissa Evans‘ Crooked Heart, Sarah Watersheds‘ The Night Watch, and Kate Atkinson‘s  Life After Life, all of which I adored, this will appeal to you. It’s a book I found desperately sad – these stories you read about people dying alone, sometimes undiscovered for a considerable time, always affect me. Paulson-Ellis has taken such a scenario, and woven a life from it, as well as the tale of Margaret Penny, who has reached 47 and realised how easy it is to lose everything you thought was yours.

Mary Paulson-Ellis is an original and exciting new voice to look out for on the Scottish fiction scene, and I’ll definitely be looking forward to seeing what she comes up with next. Meanwhile, if you enjoyed the titles I mentioned, I’d highly recommend this.

My thanks to Picador Books for my copy of this novel, in exchange for an honest review.

3 thoughts on “The Other Mrs Walker – Mary Paulson-Ellis”