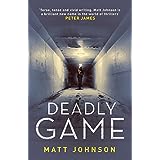 BLURB: Reeling from the attempts on his life and that of his family, Police Inspector Robert Finlay returns to work to discover that any hope of a peaceful existence has been dashed. Assigned to investigate the Eastern European sex-slave industry just as a key witness is murdered, Finlay, along with his new partner Nina Brasov, finds himself facing a ruthless criminal gang, determined to keep control of the traffic of people into the UK. On the home front, Finlay’s efforts to protect his wife and child may have been in vain, as an MI5 protection officer uncovers a covert secret service operation that threatens them all… Picking up where the bestselling Wicked Game left off, Deadly Game sees Matt Johnson’s damaged hero fighting on two fronts. Aided by new allies, he must not only protect his family but save a colleague from an unseen enemy … and a shocking fate.

I remember starting Matt Johnson’s first thriller, Wicked Game, and worrying it was going to be a “man’s book” – okay, I know that’s a totally un-PC thing to say, but I had a fear it would be all about different kinds of guns, and army stuff, and I would be a bit, well, bored. I actually mention it in my review (here.)

Not to worry. I was in good hands (I should have known – Karen Sullivan at Orenda Books wouldn’t sign a duff book, with limited appeal. It’s simple – you know you’re in good hands when you open an Orenda title.)

So I was wondering, almost exactly one year one, would Matt Johnson be able to create the same magic again? No. He’s written something even better. I read for about 20 minutes then settled down, for the long haul, like you do when you open a book that’s just what you need at that moment in time – and, for me, it was a solid, meaty thriller, with an intriguing storyline that had enough legs and complexity to carry it through 354 pages. And action! Hell, there’s tons of action, with the modest Robert Finlay using his army skills to save the day on several occasions.

Due to a bit of  typically-MI5 finagling, he finds himself on a rest-and-recuperation trip to Egypt, armed with a book pressed on him by his liaison officer, Toni Fellowes, which just happens to have been published by a company owned by the same family which owns the hotel he’s staying in. It’s a book the Security Services are rather interested in, as it reveals details of “black ops” – off-the-book, deniable missions. Someone’s broken the Official Secrets Act (I’ve actually signed it, when I worked for the Scottish Government. It felt very dramatic when they told me what it was. I could tell you what my job was, but then I’d have to kill you…😁*)

This family, the Cristeas, are of interest for other reasons too – their names have been mentioned in connection with people trafficking, and the Services want as much information on them as they can get. So the ambitious Toni Fellowes is delighted when Robert helps one of the Cristea family when she gets into difficulties diving. He makes a friend for life, and is invited to her wedding in Romania. He’s still blissfully unaware MI5 have been behind his initial meeting with the family – an unethical move that causes a disagreement in Toni’s office. But when have the Security Services worried about ethics..?

When Robert returns, after some debate about where to put a man whose been through some serious scary stuff, he moves into his new job – investigating people trafficking, with the Amazonian beauty Nina Brasov by his side.

Don’t worry – none of this is spoiler stuff. It all happens at the very start of the book, and it doesn’t let up. As well as investigating people trafficking, there’s the question of the identity of the writer MI5 and 6 are interested in. There’s also a call for help from the widow of one of his men killed in the first book, to help dispose of a gun, and some Arabic-looking paperwork. Why did he think this pile of old papers had value? And there’s still dissatisfaction in some heads, especially Toni Fellowes’, as to the official reasons given for the deaths in the first book…

Do you have to have read the first book? No – because what happened is helpfully laid out in an official report near the start of the book. I found it a useful reminder too.

There’s loads going on here, as you can tell, but it all clicks together beautifully – Johnson showed potential as a writer in book one, but I didn’t expect to see such a huge leap in terms of complexity. I was quite blown away. As ever, you get the impression Johnson has been there, done it, and got the T-shirt – or scars! – to prove it. Again, there’s no technical overload. The subject matter is topical still, sadly – despite the book being set in 2001. I think people trafficking is the most heinous crime – worse than some murders. Johnson makes a great hero – easygoing and funny. And wife Jenny’s there again, with solid support – a typical Army wife. Can you tell yet I enjoyed it??!

Plus…you can see book three is going to be bloody fantastic! So will we see each other here, end of March, 2018? I hope so!

*I worked in the central enquiry unit, really just a call centre for the entire Scottish Government and civil service. And I hope I’m not breaking the Official Secrets Act if I tell you that you got randoms phoning, asking to speak to the First Minister. Daily. Sigh…

I received a copy of this book from Karen Sullivan and Anne Cater at Orenda Books in exchange for an honest review.