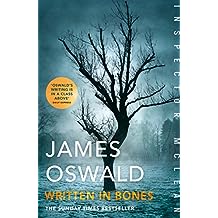 BLURB: When a body is found in a tree in The Meadows, Edinburgh’s scenic parkland, the forensics suggest the corpse has fallen from a great height.

Detective Inspector Tony McLean wonders whether it was an accident, or a murder designed to send a chilling message?

The dead man had led quite a life: a disgraced ex-cop turned criminal kingpin who reinvented himself as a celebrated philanthropist.

As McLean traces the victim’s journey, it takes him back to Edinburgh’s past, and through its underworld – crossing paths with some of its most dangerous and most vulnerable people.

And waiting at the end of it all, is the truth behind a crime that cuts to the very heart of the city…

With Inspector McLean no. 7 (Seven! Already! Seems incredible!) hitting the shelves late last month, James Oswald agreed to give us the lowdown on what he reads – when he’s not writing an Inspector McLean book, one of his fantasy novels, or running his 350-acre farm in Fife. He’s got to be the hardest working – and one of the most pleasant – men in Scottish crime fiction. That’s not to say they aren’t all pleasant…okay, stop digging…Over to James…

One of the problems of running a farm and writing two or more novels a year, as I have done for the past four years now, is that it leaves very little time for anything else. I can’t remember the last time I watched much on the television, and movies are something of a distant memory these days (although I did make an effort to go and see Star Wars: Rogue One at the cinema).

For a while I even found it hard to read books at all. So wrapped up in my own writing, I’d either feel guilty that I wasn’t working on the next thing, or start to edit whatever I was reading and thus kill all enjoyment of it. This situation was made even more fraught by the sheer number that get sent to me by editors hopeful of a blurb.

You cannot write in a vacuum though, and so I have made a concerted effort to refill the well by reading more. I’m also trying to be a bit more organised and make notes of what I’ve read. That way when I’m asked to name my five favourite novels of 2017, I’ll at least have a list to choose from. Last year I had to go around the bookshelves trying to remember what I’d read and when.

I’ve just finished reading How To Kill Friends And Implicate People, by Jay Stringer. It’s a wonderfully, comically dark tale of professional hitmen, bicycle courier private detectives and Glasgow gang lords and the second book in his Sam Ireland series. Stringer’s writing is always a joy to read, and this book was no exception. Highly recommended.

I am currently reading Elodie Harper’s The Binding Song, a darkly claustrophobic novel set mainly in a high security prison in Norfolk, where several inmates have committed suicide. The word is that a mysterious, ghostly apparition is haunting the prisoners and driving them to kill themselves, but is it really a ghost or some mass hysteria? It’s early days yet, but the characterisation is spot on, the storytelling very compelling for a debut novel. This is one of those books sent to me to read, most of which I give up on after the first few pages. That I’m three quarters finished and look forward to my meagre allocated reading time each day is the highest praise I can give. It’s not out until June 29th, but I suggest you all mark the day in your diaries.

Well, I for one definitely fancy The Binding Song. And James isn’t the only one I’ve heard mention Jay Stringer…so there’s more great recommendations for you! I’m currently reading Written In Bones and will review it as soon as I’m done.

2 thoughts on “What I’m Reading, What I’ve Read… – James Oswald”