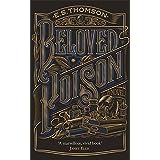 BLURB: The object I drew out was dusty and mildewed, and blotched with dark rust-coloured stains. It smelt of time and decay, sour, like old books and parchments. The light from the chapel’s stained glass window blushed red upon it, and upon my hands, as if the thing itself radiated a bloody glow.

Ramshackle and crumbling, trapped in the past and resisting the future, St Saviour’s Infirmary awaits demolition. Within its stinking wards and cramped corridors the doctors bicker and fight. Ambition, jealousy and hatred seethe beneath the veneer of professional courtesy. Always an outsider, and with a secret of her own to hide, apothecary Jem Flockhart observes everything, but says nothing.

And then six tiny coffins are uncovered, inside each a handful of dried flowers and a bundle of mouldering rags. When Jem comes across these strange relics hidden inside the infirmary’s old chapel, her quest to understand their meaning prises open a long-forgotten past – with fatal consequences.

In a trail that leads from the bloody world of the operating theatre and the dissecting table to the notorious squalor of Newgate and the gallows, Jem’s adversary proves to be both powerful and ruthless. As St Saviour’s destruction draws near, the dead are unearthed from their graves whilst the living are forced to make impossible choices. And murder is the price to be paid for the secrets to be kept.

If someone had told me I’d have spent nights engrossed in a book about the history of medicine and apothecary, and the story of a hospital in 1850, I’d have been slightly sceptical. But Elaine Thomson’s Beloved Poison is an absolute gem of a historical crime novel – highly original – and I’m not at all surprised it made it to the shortlist of four books for the McIlvanney Prize for Best Scottish Crime Novel of 2016. It didn’t win, but it’s most definitely worthy of further investigation!

Our protagonist is Jem, who more or less runs the apothecary single-handedly in St. Saviour’s hospital. Jem’s mother died in childbirth, as did one of the twins she was carrying. Sent away to be brought up in the country for eight years, few people in St. Saviour’s recall if it was the male or female twin which survived. But Jem is in fact Jemima, not Jeremiah, a secret she hides by binding her breasts and walking and behaving like a man. A woman would never be allowed to hold such a position in those days, but with Jem’s father’s ailing health she finds herself taking on more and more responsibility.

However, a stranger arrives to work at St. Saviour’s – Will, an architect who has been sent to oversee the somewhat gruesome removal of the bodies buried in the graveyard next to St. Saviour’s, this being the first stage in the movement of the entire hospital to the south of the Thames.

Will and Jem become fast friends, and whilst showing Will around the hospital, he and Jem come across six tiny coffins, with effigies of dolls inside, wrapped in blood-soaked cloth. (Shades of Ian Rankin‘s The Falls – the real mysterious coffins reside in the National Museum of Scotland in Edinburgh.) They bring the coffins to the attention of Dr. Bain, the only other person in the hospital Jem counts as a friend and trustworthy. Together they have been working on a treatise on poisons and their effects, and Dr. Bain has been known to test the poisons in small quantities on himself to see their effects. His fatal flaw, however, is that he is a notorious womanizer, even sleeping with his colleagues’ wives, and making no attempt to hide it. Little wonder that there are people out for revenge. Being no fool, he realises this, and leaves a series of clues with the most unlikely people in the hope that, should anything happen to him, Jem, with Will’s help, will figure out the meaning of the coffins, and their connection to a series of heinous crimes.

There are a wonderful variety of characters in and around St. Saviour’s – Gabriel Locke, trainee apothecary, who enjoys spending his time tormenting nurse Mrs. Speedicut (Greedigut, to him!), who carries all the hospital gossip to the apothecary; Dr. Magorian, Dr. Graves and Dr. Catchpole, who resent Dr. Bain’s “shocking, new-fangled” medicinal ideas (like keeping wounds clean, and operating in whites so any dirt can be seen); Eliza Magorian, daughter of the doctor and Jem’s childhood friend and sweetheart, who’s been persuaded by her mother to join the lady almoners, who read the Bible to patients; and Joe Silks, leader of a gang of orphan urchins who carry messages for the more agreeable members of staff for a shilling. And that’s before we get to the ghost – a Prior who walks the streets near the hospital when it’s foggy…

These are just some of the characters involved. The storyline itself is wonderful, and a warning that the poor should never try to pull one over on the rich and powerful…

I am delighted to tell you that this book is to be the first in a series featuring Jem. I particularly found the work Jem did, and the plants he nurtured in the garden, absolutely fascinating. I urge you to seek out this book, and enjoy it for yourself. I can assure you that you too will find yourself utterly immersed in the fascinating mysteries St. Saviour’s holds. Roll on the next book featuring Jem Flockhart!

My thanks to Constable and NetGalley for my ARC of this novel in return for an honest review.