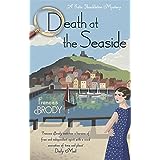 BLURB: Nothing ever happens in August, and tenacious sleuth Kate Shackleton deserves a break. Heading off for a long-overdue holiday to Whitby, she visits her school friend Alma who works as a fortune teller there.

Kate had been looking forward to a relaxing seaside sojourn, but upon arrival discovers that Alma’s daughter Felicity has disappeared, leaving her mother a note and the pawn ticket for their only asset: a watch-guard. What makes this more intriguing is the jeweller who advanced Felicity the thirty shillings is Jack Phillips, Alma’s current gentleman friend.

Kate can’t help but become involved, and goes to the jeweller’s shop to get some answers. When she makes a horrifying discovery in the back room, it soon becomes clear that her services are needed. Met by a wall of silence by town officials, keen to maintain Whitby’s idyllic façade, it’s up to Kate – ably assisted by Jim Sykes and Mrs Sugden – to discover the truth behind Felicity’s disappearance.

And they say nothing happens in August . . .

Frances Brody‘s Kate Shackleton mysteries are rather like Jacqueline Winspear’s Maisie Dobbs series, or Catriona McPherson’s Dandy Gilver books – written in the present day, but depicting a female sleuth in the “Golden Age” era; the 1920s and 30s. I haven’t actually come across Frances Brody ‘s novels before, but, as regular followers of crimeworm will know, I’m a huge admirer of Catriona McPherson, be it her standalone psychological thrillers or the Dandy Gilver series, so I was pretty sure I’d enjoy this one.

From what I could gather, Kate, who was widowed in the Great War, usually runs an investigation agency in Yorkshire with the help of Jim Sykes, an ex-policeman, and Mrs. Sugden, her housekeeper. Kate’s grown up around the police force, her father being a Superintendent in the West Riding police force. However, this book sees them all holidaying conveniently near each other on the Yorkshire coast, with Kate planning to spend time with old school friend Alma and her daughter Felicity. But not long after her arrival in town she’s moseying around the shops when, on finding the jewellers mysteriously unattended, she goes into the back room to find the proprietor, Mr. Philips, dead, apparently due to a small wound at the back of his skull. As a stranger in town, and first on the scene, Kate falls under suspicion and Sergeant Garvin even detains her in a cell for a night!

Feeling that he’s ill-equipped to investigate a murder, Kate gathers Mr. Sykes (and his wife) and Mrs. Sugden and they do their best to investigate – not easy in a town like Whitby, where smuggling has a long history – which may not all be in the past – and people are close-mouthed, particularly with strangers. Alma, Kate’s friend, also falls under suspicion, as she had taken tea several times with Mr. Philips, and there was some debate that he may have raised her expectations, only for her to see them dashed. Indeed, it seems the dashing and charming Mr. Philips was quite a popular man with the ladies, which, if true, could mean a large pool of suspects of disappointed women and angry or jealous husbands!

Up from Scotland Yard to aid Sergeant Garvin’s inexperience with murder, and his unimaginative investigation, is Chief Inspector Marcus Charles, who has a history with Kate – in fact, he’d previously proposed to her, only to be turned down. However, he hasn’t always got things right either…So it looks to be left to Kate and her unlikely team to solve the crime.

Felicity’s still missing, however, but the fact that her boyfriend Brendan and Mr. Philips’s boat have also disappeared gives some indication of how they left. But is Brendan experienced enough to keep them safe on the North Sea?

There’s lots of great local colour in this book, including Bagdale Hall, the supposedly haunted Tudor mansion Alma and Felicity share with the eccentric Mr. Cricklethorpe, who’s known locally for playing the pantomime Dame. But, then again, perhaps it’s not ghosts who are going bump in the night in this house…Also, the famous ruined Whitby Abbey, and it’s beautiful jet, made fashionable when Queen Victoria chose it for her mourning jewellery, make cameo (if you’ll pardon the unintentional pun!) appearances.

Family secrets and lies and long-lost fathers play a big part in this hugely enjoyable cosy mystery, which I’d recommend to anyone looking for a lighter read – but with an intriguing mystery which won’t disappoint. Of course, the wonderful characters of Kate, Mr. Sykes, and Mrs. Sugden are the real stars, and for that reason I’ll be on the lookout for more Kate Shackleton mysteries.

My thanks to Piatkus Books for my copy of the novel in exchange for an honest review.

9 thoughts on “Blog Tour – Death At The Seaside – Frances Brody”