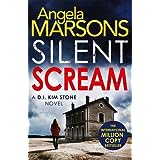 BLURB: Five figures gather round a shallow grave. They had all taken turns to dig. An adult-sized hole would have taken longer. An innocent life had been taken but the pact had been made. Their secrets would be buried, bound in blood…
Years later, a headmistress is found brutally strangled, the first in a spate of gruesome murders which shock the Black Country
But when human remains are discovered at a former children’s home, disturbing secrets are also unearthed. D.I. Kim Stone fast realises she’s on the hunt for a twisted individual whose killing spree spans decades.
As the body count rises, Kim needs to stop the murderer before they strike again. But to catch the killer, can Kim confront the demons of her own past before it’s too late?

Now this book is available in paperback – and it’s sold one million copies internationally, an incredible amount for any novel – it’s time to revisit my thoughts on Silent Scream.

When I first read this, when it was only available as an eBook, the main surprise was the fact that this was a debut novel; it read like it came from the pen of a seasoned crime writer. Back then it was Bookouture’s first foray into crime, and they unearthed a corker of an author.

It’s thus far a four book series featuring DI Kim Stone, a complex character – her closest, indeed only friend, is DS Bryant (whose first name, as far as I can ascertain, we never learn.) Having grown up in care after her (possibly schizophrenic) mother left her and her twin brother Mikey to die in horrendous circumstances (which Mikey did), she decided to never let anyone close. When a couple who wanted to adopt her when she was around 12 were killed in a car accident, Kim’s wall came down again – this time seemingly for good. She spends her time rebuilding motorcycles, and listening to classical music – but most of the time, she works.

This case must have triggered harrowing memories for Kim. It begins with the death of a private school principal, Teresa Wyatt, by drowning – and not naturally. Then a recovering alcoholic, Tom Curtis, finds a bottle of expensive malt on his kitchen table. He knows another drink will kill him, but can’t resist. However, before he can finish it, his throat is cut. Investigations into the victims’ pasts reveal a link – they both worked at the same time at Crestwood House, which was a home for particularly troubled girls in the care system, until it was gutted by fire in 2004. These murders are taking place just when local archaeologist Professor Milton has been given the go-ahead to excavate the grounds, in the hope of finding valuable coins. There have been objections launched by a local lawyer’s firm, and, before she died, Teresa Wyatt, the school principal had contacted Professor Milton. But then his dog was poisoned, and, terrified, he went into hiding. Someone clearly doesn’t want any digging to be done in the grounds of Crestwood House – which makes Kim and her team, which also comprises DC Stacey Wood and DS Kevin Dawson, all the more determined to unearth the secret that someone is prepared to kill to keep…The Prof, plus Cerys Hughes, an archaeologist and forensic scientist, and Dr David Matthews, are brought in to see what exactly someone will kill to keep hidden, plus forensic pathologist Dr Daniel Bate arrives to examine the bones they find (from the prologue, we know a body was buried, and that five people were involved in the burial, so that’s not a spoiler!) A few sparks fly between Kim and Dr Bate – a possible love interest for her in future books? (If she’ll allow him to get close…!) Kim and Bryant go to work tracking down other ex-staff members who may be in danger, but also who may be able to shed light on why former staff are being targeted – and, needless to say, who just might be suspects themselves. Stacey’s job is to find any of the residents from back then, who may recall something crucial. She locates Nicola Adamson, an “exotic dancer” who lives well from her earnings in an upmarket “gentleman’s club”, and she does her best to help with figuring out who may be buried in the grounds. Her twin sister, Beth, though, later appears at the station, and is decidedly unhelpful, telling Kim to keep her sister out of the investigation – which only piques Kim’s interest more. Why would one twin sister object to aiding the enquiry, when the other is doing her best to help?

Needless to say, there are more murders, as well as attempts at murder, and Kim and her team realise they are in a race against a very determined – and it must be said, very lucky – killer…No-one appears to see them coming and going. They could be a ghost for all the traces they leave behind…

It’ll be interesting to discover if Kim is always this driven, or if it’s because this particular case holds a personal interest. She remembers being a child in care: “She knew the pain of these girls’ past. Not one of them had woken up and chosen the future mapped out for them. Their behaviour could not be traced back to an absolute year, month, day and time. It was a progressive journey of peaks and troughs until circumstances eventually stifled hope.

“It was never the big things. Kim remembered only ever being called ‘child’. All of them had been called ‘child’ so the staff didn’t have to remember their names.”

And regarding the case: “Kim would not fail these girls because damn it, they mattered to someone. They bloody well mattered to her.”

The end of the book, as expected, surprises – I wasn’t sure “whodunit”, so cleverly did Marsons leave the possibilities open. There’s also plenty of drama and danger, when Kim, true to nature, heads off to do some solo investigation. Then, just when you’re satisfied you know what happened, Marsons throws another curve ball. And true to crime fiction “rules”, the clues are peppered throughout the book.

Kim, her team, and DCI “Woody” Woodward, her boss, are interesting characters, with potential for further “fleshing out”. They have their little quirks – like Woody’s need for a stress ball whenever Kim is in his office, and his hobby of building model cars. He clearly knows Kim’s driven, but also is aware she occasionally goes off piste – but, as she gets results, he’s willing to protect her, to a certain extent, from those above, the paper-pushers and the budget-conscious. Kim also has a habit of rubbing people up the wrong way, with her abrasive, straight-to-the-point interview style, and has no truck with handling well-connected members of society with kid gloves. This investigation includes a politically and legally well-connected local family who may hold part of the key to this case, but, with Woody’s support, Kim has no qualms about treating them like everyone else, much to their chagrin.

The next book in the series is called Evil Games, followed by Lost Girls, then Play Dead, and my advice would be to catch up with DI Kim Stone and her team, with the books in the right order if you can – that’s if you’re one of the few crime fiction fans that hasn’t already!

With thanks to Zaffre Books for sending me a paperback of this book in exchange for my honest opinion.