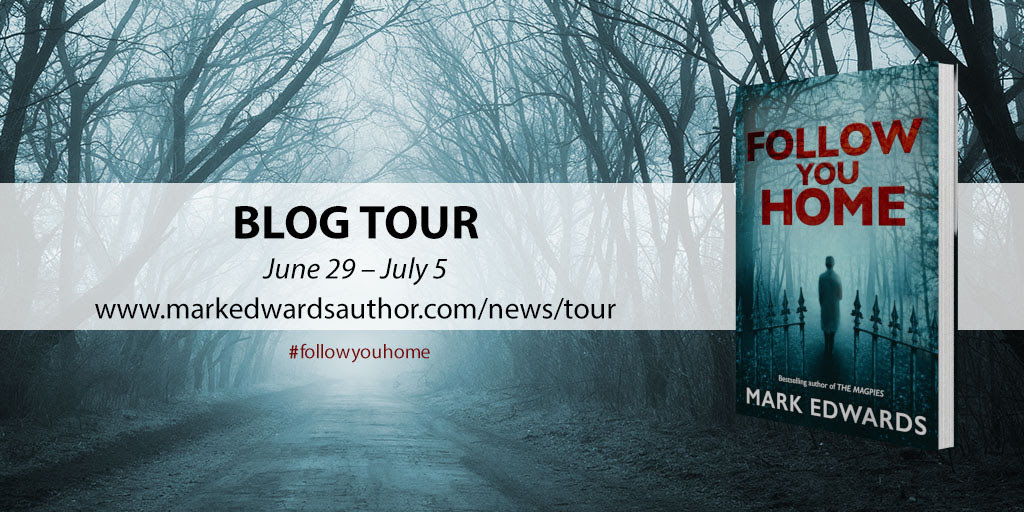 I think I’m turning into a bit of a wuss as I get older. All through my teenage years, I devoured every Stephen King I could get my hands on. I’ve been aware that my reluctance to watch horror films (unless they’re a 15, and some of them are bad enough!) has been the source of great hilarity to my children since they were of an age to start watching these movies. But I really didn’t think I’d end up with a book I’d feel so uncomfortable (okay, creeped out!) reading at night that I’d have to confine some of it to daytime hours…!

Follow You Home tells the story of Daniel and Laura, who’re in their mid-thirties and inter-railing round Europe before they settle down to marriage and mortgages and babies. They’re a solid couple, having been together five years, and Daniel, a bit of a computer whiz, is using the advance he’s received for an app he designed to fund their big last hurrah. We meet them in Eastern Europe, on a night train travelling from Hungary to Romania. Laura’s angry as Daniel neglected to book a sleeper compartment, meaning they’ve no privacy and little chance of much sleep, with their belongings to be watched over. They get chatting to and drinking with a young Romanian couple, Ion and Alina, who spot an empty sleeper compartment. They suggest their new English friends get a nap in the empty compartment, promising to wake them when the border guards and ticket collector appear so they can return to the main carriage. However, they don’t, and Laura and Daniel are woken roughly by non-English speaking officials who demand their passports and tickets – which have been stolen. Alina attempts to get involved, but only fuels the flame of the argument – which results in her, Laura and Daniel being ejected from the train at a deserted station. Not keen on the vicious dogs hanging around, they decide it didn’t seem too long since they’d passed through a town, and their best bet is to follow the rail tracks through the forest they’d run through, back to civilization. Alina decides to nip into the forest to the loo before they start their walk…but when she’s taking a while, the other two head deeper into the woods to find her, tired and exasperated. Things start to look wrong when they find one of her boots. Then they come across a house in a clearing, as though from a fairy tale. Hearing screams coming from inside, they enter the unlocked dilapidated property – and come face to face with a scene from a nightmare. Us readers aren’t privy to what they saw until over halfway through the book, which sent my imagination running crazy. Just what did they see in the house that terrified them so? They get to the nearest town as quickly as possible, minus Alina, whose fate is unknown to them, and try to report her disappearance to the local policeman on duty. But his suspicious behaviour causes them to flee the police station, minus the remainder of their belongings.

They eventually arrive home, but can’t settle. Daniel is drinking heavily to blot out what he saw and what happened, while Laura appears to all around her to be losing her mind, talking of seeing “Alina’s ghost.” Plus Laura’s got form with seeing “ghosts” – she had a spirit friend between the ages of 12 and 14 (probably brought on by the stress her less than supportive parents put her under – and still do.) Daniel and Laura soon split up, to the confusion of their friends, who know the “holiday” is somehow responsible for the destruction of what seemed a perfect match.

It’s difficult to mention much more without giving the storyline away – but the title tells you all you need to know. Unfortunately, they haven’t left their nightmare experience back on the other side of Europe – they’ve been followed home. But exactly who – or what – has followed them, breaking into their houses, stealing (then returning!) Daniel’s computer system, and committing a great deal of other malicious pieces of mischief as the book proceeds? Just what do these ‘people’ to Daniel, though apparitions to Laura, want with them – to the extent that it appears they’re willing to murder anyone who learns just what happened in Romania, and exactly what they saw? And can Daniel and Laura get themselves together again enough to defend themselves against this evil, and save their sanity, as well as their lives?

I’ve only ever read one Mark Edwards – Because She Loves Me – and, I’ll be honest, wasn’t a huge fan – it seemed quite similar to a lot of books I read around that time. But he’s on much surer ground with this book, which is more of a straight horror story. I also have his The Magpies on the Kindle, and I’m sure it won’t be long before I’m tempted by that, now I’ve read this. I’m a big fan of the fantastic British horror writer FG Cottam (if you’re a horror fan, do investigate his books, particularly the early ones – he uses music, as well as real historical characters and events, to great effect), and I can see myself following Mark’s career with the same keen interest. His plotting skills particularly are to be applauded. So if you fancy an edge-of-your-seat horror, then I’d definitely recommend you investigate Mark Edwards (below), and Follow You Home is an ideal place to start.

Are you a horror fan? I’d love some recommendations of writers I should investigate – it’s the psychological aspect I enjoy, as opposed to blood and gore. I think I need to toughen up a bit! Or do you steer clear of fodder for your nightmares? I love to get your comments!

The Quiet Geordie
David Pettyjohn
The Most Sublime

Just a quiet knitter with an addiction to books